Home / News / Inauguration of a French garden designed by the CSTB as part of... 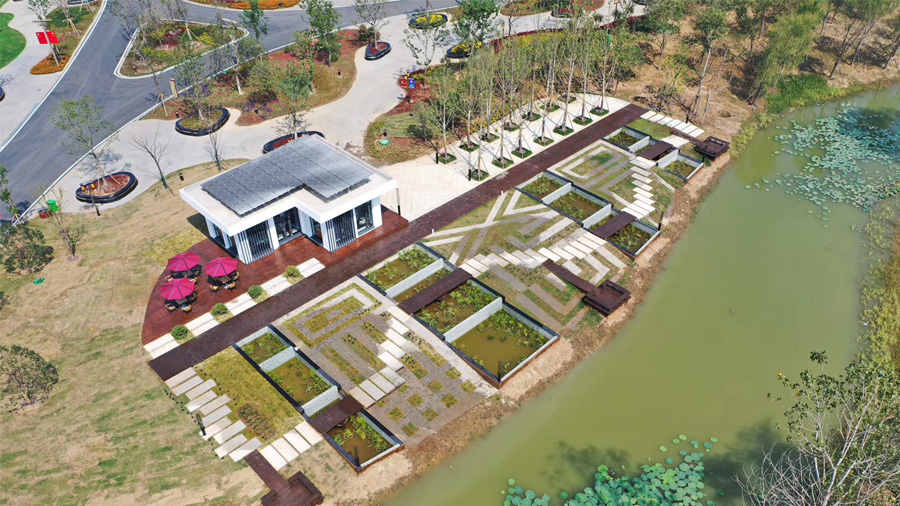 At the invitation of the 2nd Horticultural Show of Hubei Province, a garden designed in the French style by the CSTB was inaugurated on September 28, 2019, in Jingzhou, China, in the presence of Rudolph Girault, representative of the General Consulate of France in Wuhan. A total of 43 gardens were planted using innovative approaches, techniques and materials. The CSTB presented a garden model incorporating a small-scale natural water treatment system, as an example of the technique the CSTB is proposing in the eco-city project, and which could be used full scale to clean up Lake Jingzhou.

Jingzhou is one of five cities that have benefited from the Sino-French Eco-cities program, developed jointly by the CSTB, the China Eco-City Academy (CECA) and the Chinese Society for Urban Studies (CSUS). It received the Eco-City Prize in Zhuhai in April 2018 and HQE development certification. The city is bordered by a heavily polluted river and lake.

Against this background, the city of Jingzhou and the CECA asked the CSTB to design this French garden for the show. CSTB experts offered a 1600-m² ecological garden using natural water treatment techniques, specifically the lagoon techniques that the CSTB developed for the cleanup of the lake as part of the Sino-French Eco-cities program. Polluted water is pumped from the river to the overlooking garden, fed into three cascading ponds where purifying plants grow, and finally returned, cleaned, to the river.

While developing the ecological solution, the CSTB created geometric garden beds and cascades that suggest traditional French gardens, providing a glimpse of the aesthetic ideal of another era. Trimmed hedges were replaced with beds of moss and recycled materials: crushed brick and wood chip waste.

The garden is embellished with a high wooden boardwalk for a panoramic view of the vast site and the surrounding landscape. And a cafe was constructed at the entrance of the garden, with photovoltaic panels on its roof. The passive-energy building is proposed by the CECA.

Although the gardens built for the Horticultural Show of Hubei Province are temporary, the garden designed by the CSTB will remain and likely open to the public at the end of the event to demonstrate the salvage of construction site materials and techniques for the natural cleanup of stormwater, rivers and lakes.

RE2020: the CSTB takes the floor at the Coriolis Seminars for Environment watch live

Potential of recycling and reuse