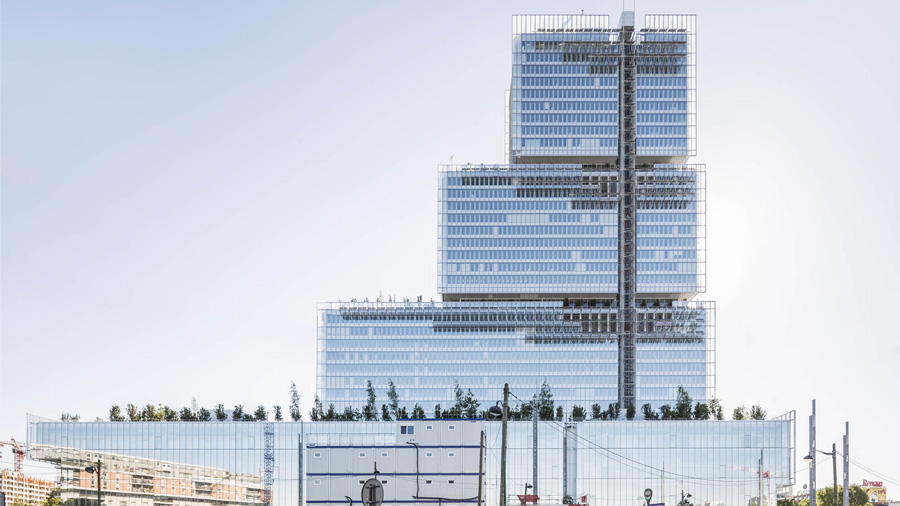 The Paris Courthouse, opening in spring 2018, was awarded the Grand prix national de l'Ingénierie 2017 and the Équerre d’argent 2017 Prize. It is also certified HQE Office Building by Certivéa. The designers of this exemplary modern building called on the expertise of the CSTB in aerodynamics and lighting. The CSTB also assessed its innovative systems.

Wind stability of the building

Standing 160 meters tall, there are 38 floors built on 3 blocks on top of a base: the Paris Courthouse (TGI) is the second tallest building in the city. Its atypical architecture—very wide in one direction and narrow in the other—was designed by the architectural firm Renzo Piano Building Workshop to optimize floor space.

The tapered shape substantially exposes the structure to wind. The job of the CSTB was to measure the wind resistance of the building by testing a 1:250 scale model of the project in a wind tunnel. The study of its aerodynamics helped guide the design of the structure around the three cores of concrete, which form its backbone (main structure).

In addition, on the highest floors of the three blocks, the building has photovoltaic panels to cover a part of its energy needs. Measuring the forces of these photovoltaic panels on the facade when exposed to wind is important to ensure stability. For this purpose, wind tunnel tests were performed by the CSTB using a 1:75 scale model of the panels.

Another design challenge: the comfort of the 9,000 people who enter the Courthouse every day.

Adorned with external glass walls, the TGI opens its doors onto a high and bright atrium which serves as the public lobby. CSTB experts were asked to study and optimize natural lighting of the space, which measures more than 5,000 square meters.

External glass walls, glass roofing or skylights? With what glazing? And what should be the shape of the skylights? These were the questions that the CSTB set out to answer using its PHANIE lighting simulation software and a full 3D model of the TGI. The CSTB compared the lighting contribution of each type of opening for various layout configurations and analyzed the external light conditions (overcast sky, clear sky, etc.). Its lighting simulations guided the architectural choices for the atrium. The atrium now has a glass wall and many skylights pointing south for optimized performance.

Also, the CSTB assisted in the design of the three large green rooftop terraces of the TGI. More than 30 meters above the ground with low overhead, the roofs are highly exposed to the wind. To make them more comfortable for users, the project included protective screens. The CSTB, which was asked to assess and optimize the installation, showed the designers that it would be best to adapt the size and porosity of the screens depending on their location. This is the case, for example, in some areas close to towers exposed to prevailing westerly winds.

The CSTB based its recommendations on the results of tests performed in a wind tunnel. After creating a 1:250 scale model of the green roof layout, it tested and analyzed various configurations to improve wind comfort.

Finally, the well-being of the occupants of the TGI was improved by choosing a double-skin facade. Such systems have a layer of air between the outer skin and inner skin, which are both made of glass. The inner layer has openings, which help provide good ventilation of the premises.

The CSTB conducted technical experimentation assessments (Type B ATEx) for the bonding system (structural sealant glazing), which attaches the outer skin to the structural frame of the building. To do this, it performed full-scale tests for the facade specialist Permasteelisa. The system was tested in a climatic chamber to check that there is no fogging, under any weather conditions.