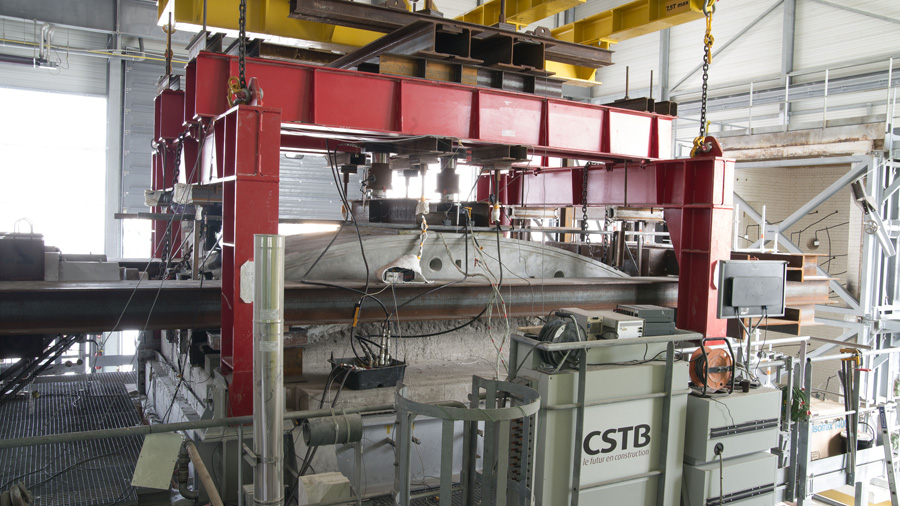 The CSTB organized an exploratory test, in collaboration with Politecnico di Milano, to visualize concrete spalling during a fire test on a tunnel segment in the Vulcain furnace, with construction industry professionals in attendance. It follows a series of tests in 2017 and 2018 on two tunnels of the Suez Canal.

The Safety, Structures and Fire Performance Department set up this full-scale test to study stability of segments — and therefore of the tunnel structure — under extreme fire conditions lasting the time necessary to evacuate users. The challenge with these tests is that it is usually impossible to measure spalling only on the part of the segment exposed to fire.

A segment measuring 60 cm thick, 2 meters wide and 4.5 meters long was subjected to temperatures reaching 1350°C (RWS curve) for two hours, the most severe conditions it would confront once installed. After the two hours, the segment underwent linear cooling for another two hours.

Measurement of spalling during the test took place in partnership with Politecnico di Milano using a system that monitors the behavior of concrete in fire. This is the first full-scale test of a very large element to assess the effectiveness and demonstrate the usefulness of the technique for real-time monitoring of the progression of damage and spalling in a fire test.

Finally, topographical surveying was performed using 3D laser scanning immediately after the test to determine the loss of material due to concrete spalling and compare it with acoustic measurements.

Measurements that cannot be predicted by calculations

Concrete subjected to extremely high temperatures and mechanical loading is likely to spall. This behavior relates to complex mechanisms that are still under study. Mathematical modeling cannot predict concrete spalling, so full-scale tests are required. The test consisted in reproducing in the laboratory the most extreme temperature and mechanical loading conditions that would exist in a tunnel during a fire. In addition to measuring concrete spalling and the progression of temperature profiles in the segment, the main objective was to check that the element tested could support representative mechanical loading of 12 MPa1 on its inner surface exposed to fire during the test. Maintaining this stress level requires continuous control of the forces applied by the vertical and horizontal cylinders, which are specific features of the CSTB facility.

A complex test with satisfactory outcomes

Performing this test is especially complex because it entails controlling many parameters to be sure the results are conclusive. First, the installation of the segment in the furnace requires considerable planning. Then, the test must factor in extremely high vertical (up to 240 t) and horizontal (up to 1020 t) mechanical loading, a curve of extreme temperatures for two hours, which must be monitored precisely, and continuous recording of more than 50 measurements.

The test went perfectly, and the outcome made it possible to determine an average concrete spalling of about one centimeter and internal temperatures that do not jeopardize the stability of the element under the test conditions.

The CSTB is the first to perform tests on half-segments assembled to determine the thermomechanical behavior of the joints between two components. It performed this kind of test for Pétrojet and the Orascom Construction-Arab Contractors consortium, project managers for the Ismailia and Port Said tunnels dug under the Suez Canal.

Find out more about:

1 A check of the stress levels applied was previously performed using strain gauges.

SIMI 2019: The CSTB Group guides you in all phases of your construction or urban development

The CSTB is participating in the Paris Games

The CSTB: a public institution attractive to talent