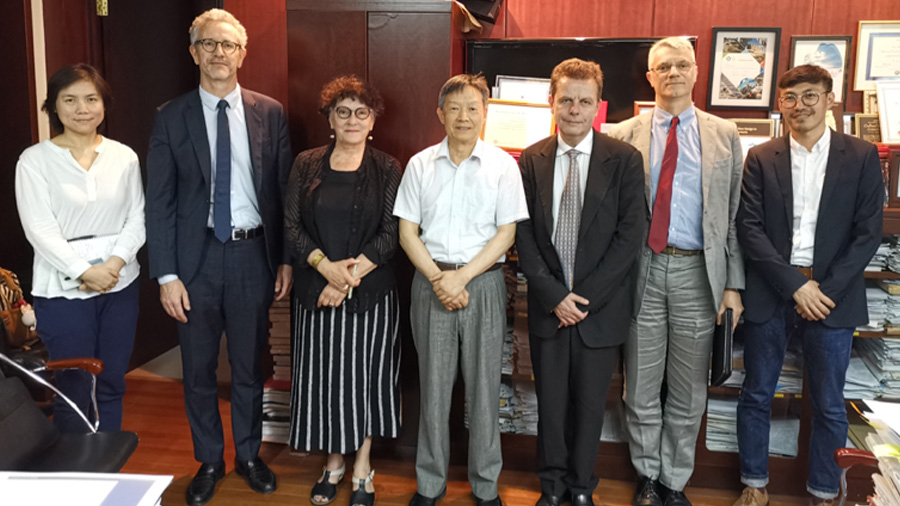 A French delegation led by Jean-Philippe Dufour, advisor for sustainable development, energy and transport at the Embassy of France in Beijing, met with Qiu Baoxing, president of the Chinese Society for Urban Studies (CSUS), counselor of state and former vice minister of housing.

They were joined by Yann Martre, director of the French Development Agency in Beijing, Étienne Crépon, president of the Scientific and Technical Center for Building (CSTB) and Cristina Garcez, director of Urban Strategies at the CSTB.

Topping the agenda, the participants took stock of the partnership formed in November 2017 between the CSTB and CSUS for Sino-French eco-city projects.

Five municipalities—Jilin City and Panshi in Jilin Province, Jingzhou in Hubei Province, Qingyun in Shandong Province and Foshan in Guangdong Province—received the Sino-French Pilot Eco-City Prize and HQE development certification following in-depth work by CSTB teams in collaboration with those of the CSUS and its subsidiary CECA. The five projects demonstrated the interest of local authorities in what such comprehensive approaches offer. Yet the Sino-French eco-city initiative can go beyond the single urban project by providing environmental performance targets for future buildings.

The CSUS and CSTB expressed their desire to take their joint work in that direction and plan to require municipalities to commit to making sure that most new buildings be HQE certified to receive the prize.

During the meeting, Mr. Baoxing and Mr. Dufour led a discussion examining the ways China and France can step up their cooperation in sustainable urban development, as both governments want.

Regarding Sino-French eco-cities, the CSUS wants to select 40 to 50 Chinese cities over the next 3 to 5 years, each receiving support from the CSTB. Then, 4 to 5 cities would be chosen as ecological demonstrators where partners can focus their efforts to achieve tangible results. Last summer, the initiative added new municipalities and aims to select winners by the end of the year.

The CSUS also proposes expanding cooperation to the reconstruction of ancient cities and protection of historic areas.