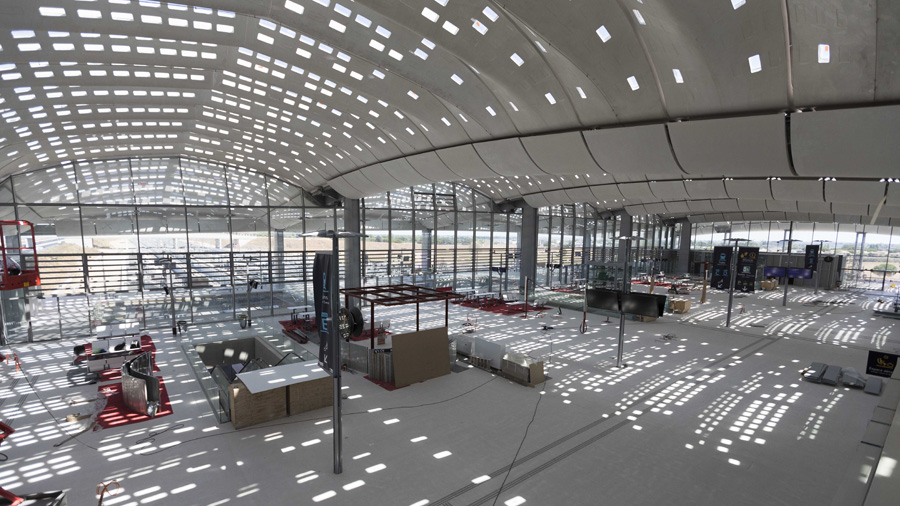 Comprising a roof made of ultra-high performance fiber-reinforced concrete (UHPFRC), with an openwork pattern of 10,000 glazed openings, the new train station in Montpellier is a technical and architectural innovation designed by Marc Mimram. This is the first time that UHPFRC has been used both for the roofing and the structure of a building. At the request of the François Fondeville Group, tasked with implementing the project under a design-build contract, the CSTB conducted an aerodynamic study to evaluate the wind loads exerted on the station, as well as an expertise to analyze the safety and feasibility of integrating the glazed openings into the roof.

How much wind resistance does the building have?

The building, reproduced in a physical test specimen on a scale of 1:150, was tested in the atmospheric boundary layer wind tunnel at the CSTB site in Nantes, with special attention paid to the roof. Its wave shape, structured out of an assembly of 115 folded, curved “fins” made of UHPFRC, divided into 5 domes, provides resistance, like the veins of a leaf, while the curves channel the wind that crosses through the building, cooling it down.

In order to accurately simulate the speed and turbulence intensity profiles, rough surfaces were placed upstream from the test specimens. At the time when the study was conducted in 2015, the environment around the train station was very clear (no buildings were located around it when the project was launched). The CSTB raised some concerns with the developers: what would be the impact of future developments on the station if multistorey buildings are built nearby.

The wind resistance of the fins, held in place by their own weight (12 to 15 tons), required the development of special treatments to make use of the experimental data, before being put through in situ physical tests.

The glazed openings were bonded one by one to stainless steel frames, which were then bonded to the UHPFRC fins. The glazing was analyzed by the CSTB and Apave, the project's technical inspector. The appraisal focused on the safety and feasibility of the operation and the risk of defects. The structural bonding technique examined by the study represented approximately 939 sq. meters of glazed panels, or exactly 10,516 window frames, with insulated glazing and laminated glazing structurally bonded to the UHPFRC roof in a PASS VEC certified workshop. The CSTB issued a few recommendations, and the conclusions of the study were favorable regarding all of the assessed criteria.

“The Montpellier Sud-de-France train station presented certain specific structural issues requiring the assistance of the CSTB. The experts of the CSTB conducted tests on the impact of the wind on the roof, in the laboratory in Nantes; they guided us through the ATEx application process for the UHPFRC roof, supplemented with in situ trials to test the solidity of a roof component. The collaboration went very well. The technical discussions, both before and after the tests, were very clear and helped us make our choices. The CSTB's serious, professional approach was very convincing.”