Home / News / A chimney that resists hurricanes and improves natural...

A chimney that resists hurricanes and improves natural ventilation 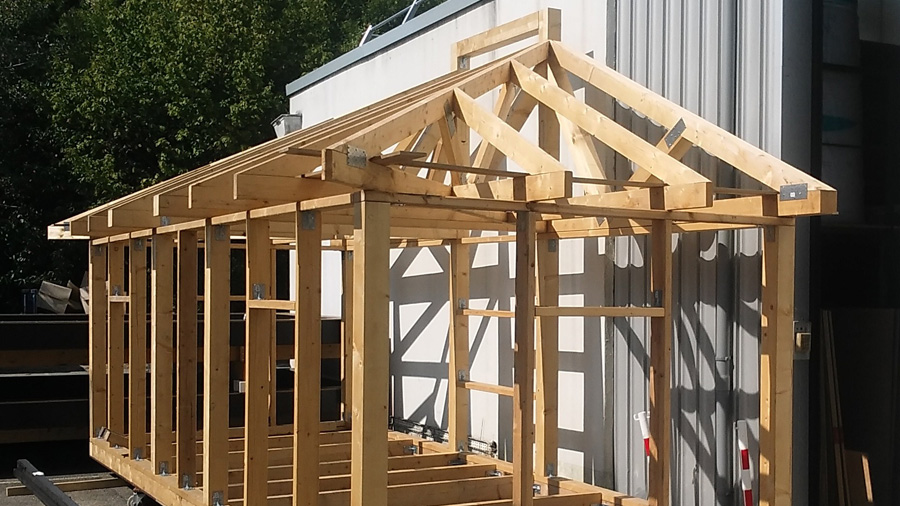 The central chimney of the hurricane-resistant bungalow helps the roof withstand extreme winds and generates natural ventilation, thanks to the trade winds

The CSTB has developed a hurricane-resistant chimney, which reinforces houses in hot regions subject to hurricanes. This innovation enables a building to withstand a hurricane and gives it optimal natural ventilation, reducing the need for air conditioning. The CSTB has now built a prototype which will be tested in 2017 in the CSTB's Jules Verne wind tunnel in Nantes, and will then be sent to Florida to confront a real hurricane.

A prototype, tested in a climatic wind tunnel...

In 2016, the CSTB designed and built a prototype of a hurricane-resistant bungalow, based on two patents it had filed. Objective: to test the prototype in the Jules Verne climatic wind tunnel in Nantes, which can accommodate full-scale test specimens. The first set of tests, scheduled for April and May 2017, will serve to finalize the prototype's design. Next, it will be tested under completely real conditions, since it will have to withstand the beating that only a real hurricane can give.

...then sent to Florida

This is why the CSTB contacted the University of Florida, which has an in situ hurricane study program, consisting of setting up measurement instruments before the storm. The bungalow, which can be transported on a trailer, will be set up in the path of the hurricane by the university. The prototype is scheduled to be sent in a container to the United States in fall 2017.

A look back at the concept of the hurricane-resistant house, which is the subject of two patents by the CSTB

Hurricane resistance of the roof

The result of 15 years of research, the first patent of the CSTB, filed in 1998, focuses on the concept of a ventilation chimney, which makes the roof more resistant during a hurricane. This concept aims to reinforce houses built in the overseas French territories, in hot regions. The chimney creates a negative pressure inside the house, thereby reducing the pressure difference between the higher and lower parts of the roof. The wind's suction effect, which is liable to rip the roof off, is thus greatly reduced.

In recent years, a new challenge has emerged: electricity consumption due to air conditioning. As houses are increasingly equipped with AC systems, this consumption is rising exponentially. As electricity production capacities are limited, especially on islands, the CSTB initiated research to develop natural ventilation to reduce the need to cool houses with air conditioning.

Dual function of the hurricane-resistant chimney

The CSTB has resized the hurricane-resistant chimney: its square section has gone from 10 cm on each side to about 1.8 m. It can thus ventilate a 60-sq.-meter bungalow subject to an air flow estimated at 3 m3/hour, similar to the air flow generated by the trade winds, which are common in the intertropical regions. Thus, the chimney has found a new function of natural ventilation, for which the CSTB filed a second patent, in March 2013.