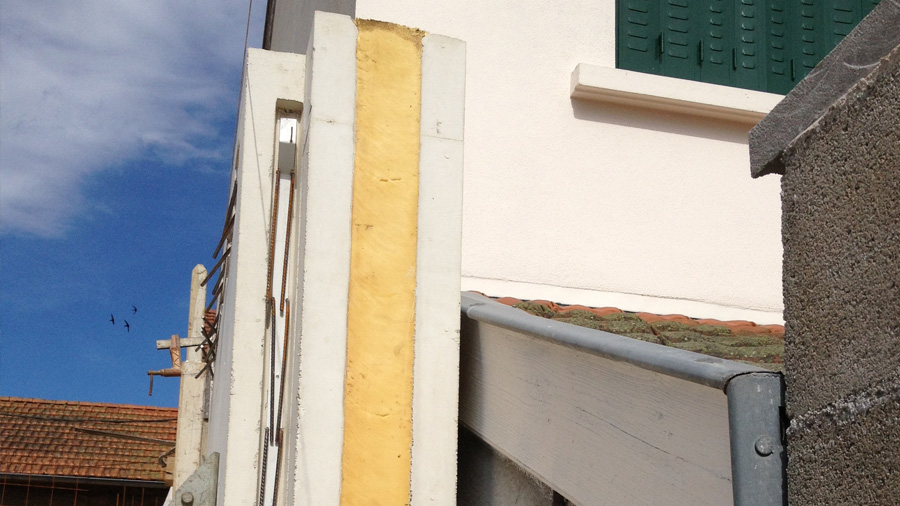 2016: The industrial companies GBE and Lafarge received a Technical Approval for a cast-in-situ wall with integrated insulation and concrete skin. This system has just taken its fourth technological leap, 20 years after the emergence of the first solution of its kind on the market. The CSTB has supported the advancement of this innovation since its beginnings. Working alongside the stakeholders through the assessment procedure, the CSTB helps ensure the safety and stability of their system.

In 1994, the CSTB reviewed an application by the Alsatian company Spurgin for a Technical Approval of its wall with integrated formwork (known as "Prémur"). Already used in Germany, the product then entered the French market.

The first technological leap occurred the following year. There are now three functions united in one system: frame, insulation material and facade skin. The CSTB is guiding Eurobéton in assessing its prefabricated sandwich panel, which consists of a supporting concrete wall, insulation material and exterior concrete skin. The first Technical Approval was issued in 2000.

These techniques quickly led to the development of an insulated concrete form wall (MCII). The second technological leap concerned the weight of the new solution, which is lower than sandwich panels. The size of the walls can then be increased while decreasing the number of joints on the façade, a real plus for architects. No matter how far their system has been developed, innovative manufacturers like Jousselin, H&H Technologies and Fehr are supported by the CSTB through the assessment and testing procedures.

When performing its analyses, the CSTB determines the elements of proof (calculation notes, tests, simulations, etc.) required to help manufacturers develop their technical documentation. Even when there are no regulatory requirements, the CSTB nonetheless focuses on the safety of people by addressing the need for structural integrity of the facade skin in case of fire.

Third technological leap: The company Léon Grosse developed the same type of concrete facade wall, but, this time, cast-in-situ. After receiving a Technical Experimentation Assessment (ATEx) from the CSTB in 2009, Isovoile® obtained a Technical Approval in 2013. There are no longer any constraints due to the size of the prefabricated panels (12 x 3 m maximum) or due to transport or on-site storage. And there is now flexibility in choosing the thickness and composition of skins.

Léon Grosse is the only company that can implement this solution on-site because the system is based on an original manufacturing and installation method, designed by the company.

The fourth technological leap resolves the challenge of universalizing the system. In 2013, GBE and Lafarge, respectively, providers of connectors and ready-mix concrete, spearheaded this development.

The CSTB was approached by both companies for step-by-step support, from the first Technical Experimentation Assessment (ATEx) to the Technical Approval they received for their innovation at the end of 2016.

The CSTB’s role was to make sure that the technical specifications for the safety of this type of system are compatible with the practices of potential user companies.

François Jallot appointed Director of the Safety, Structures and Fire Performance Department at the CSTB