Home / News / The CSTB, involved in designing the roof over the...

The CSTB, involved in designing the roof over the Philippe-Chatrier court at Roland Garros 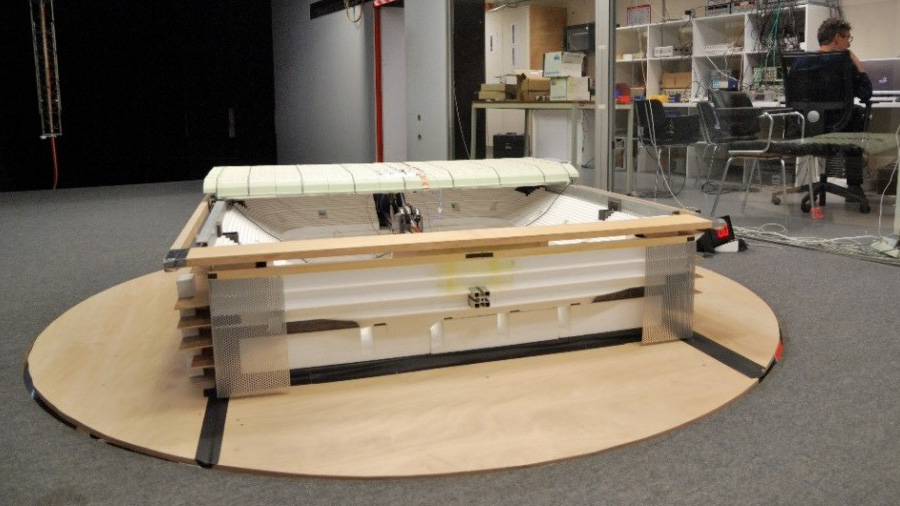 Aeroelastic model of the roof over the Philippe-Chatrier central court. Photo: CSTB

As part of the renovation of the Philippe-Chatrier central court at the Roland Garros Stadium, a movable roof has been built over the stands and the tennis court. It will allow matches to continue in spite of difficult weather conditions and will provide spectators with optimal comfort. The CSTB assisted in the design process by conducting tests in one of its cutting-edge facilities: the atmospheric wind tunnel in Nantes.

At the request of Cimolai, a company specializing in the design, construction and installation of very large metal structures, commissioned by the French Tennis Federation, the CSTB carried out a comprehensive study on a 1/70 aeroelastic model of the roof. This study assessed the wind behavior of the roof’s structure, made up of eleven wings that are mobile, because they are supported at the tips by bogies rolling on two parallel rails, situated at the top of the east and west stands.

Based on data provided by Cimolai concerning the environment, geometry and mechanical characteristics of the roof, in terms of rigidity and weight, a small-scale model representative of the actual structure was designed.

The model was calibrated in the wind tunnel in order to reproduce the basic components of the actual structure’s dynamic behavior, determined by Cimolai through digital modeling.

Next, the model’s behavior was analyzed in the wind tunnel for various positions of the wings and under different angles of wind incidence and wind speeds, determined in accordance with the project’s stakeholders. The objective of the test campaign was to measure the structure’s response to the movement of the wings and the reaction force on the wings’ bogies.

The wind tunnel study also measured the structure's response to a large number of speed and wind direction configurations, and to different positions of the roof: folded, unfolded or intermediate. These results could not have been achieved by other methods within the budget.

Another conclusion of the study by the CSTB: no contact was found between the wings in the folded position, when they vibrate due to the effect of the wind.

The careful, rigorous approach to building the model, the large number of configurations tested, the regularity and complementary nature of the results obtained, as well as the analysis provided and consistency with previous studies conducted on a rigid model, led to the conclusion that the conditions had been met for optimized, informed wind loading of the roof.

Behind the scenes at the Silver BIM Awards 2018: the Jardins de l'Arche Tower in La Défense with the CSTB